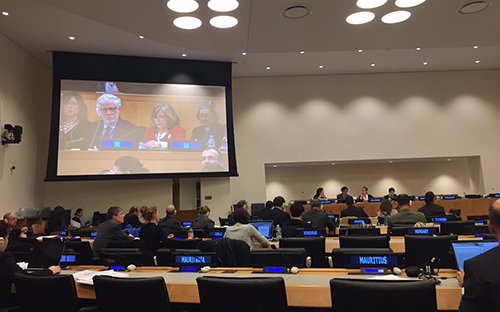 Professor Hal Abramson, who joined the Touro Law Faculty in 1983, has devoted most of the past three decades at Touro on the development and practice of domestic and international dispute resolution.
His most recent practice and scholarship initiative took him to the United Nations where he participated in the drafting of the new Singapore Mediation Convention. At the UNCITRAL (United Nations Commission on International Trade Law) drafting meetings, Professor Abramson represented two NGOs-the International Mediation Institute (IMI) in The Hague and the International Academy of Mediators. He also assisted UNCITRAL, as an expert advisor, when he designed and conducted three mediation education programs for the state delegates. The drafting meetings were held at the United Nations in NYC and Vienna.
This new treaty is the product of three years of deliberation by the 60 member states selected by the General Assembly and a dozen governmental and nongovernmental entities. The Singapore Convention is designed to facilitate cross-border enforcement of mediated settlements in a global economy, for which there is currently no procedure in place. The treaty was formally approved by the General Assembly in December and will open for signature in early August in Singapore.
Last month, Professor Abramson also spearheaded with Professor Love at Cardozo a global symposium on the new treaty in order to produce a reference book on the Singapore Mediation Convention. Many of the speakers at the symposium were state delegates who helped draft the convention, and each speaker prepared a chapter for the book. The sixteen chapter book will cover key topics relevant to any country considering adopting the mediation convention or any party considering using it. The book is scheduled to be published during the summer. Last Fall, Professor Abramson also wrote a substantial article on the process for creating the treaty and a legislative history of key provisions. It will be published soon as a chapter in a new book on international mediation that will be published by Oxford University Press.
Professor Abramson, reflecting on the three-year drafting process, observed that, “The process at the U.N. employed the best practices of a skillful and effective multiparty negotiation process. Throughout the drafting, delegates proposed provisions designed to meet the various interests of different home countries in order to produce a global treaty that would meet the needs of any country. The result was an enforcement mechanism for mediated agreements comparable to the highly-regarded 1958 NY Convention for enforcing arbitral awards. I only hope that practitioners and scholars looking in hindsight ten years from now will conclude that we did our jobs well.”
Professor Abramson’s extensive scholarship on dispute resolution includes two books and international awards for two of his publications. He has taught courses on negotiation, mediation, mediation representation, and international conflict resolution in addition to teaching a range of business-related courses, including contracts. His teaching and training on dispute resolution have taken him to nineteen countries on six continents.
For his contributions to the field of dispute resolution, Professor Abramson received the 2013 Peace Builder Award from the New York State Dispute Resolution Association. He has been selected for the International Who’s Who of Commercial Mediation since its inaugural year. Professor Abramson also was selected by UNLV as one of its first two senior ADR scholars and served as the first Scholar-in-Residence for the International Academy of Mediators (IAM). He currently serves as the Negotiation Advisor to the dispute resolution and leadership program at the US Air Force Academy after visiting there for a year to assist USAFA to build their negotiation program, including teaching negotiations and training negotiation teachers.
He served as Chair of the ABA Committee of the Section for Dispute Resolution that drafted the mediation representation rules for its national competition and served as a member of the inaugural committee that launched the International Chamber of Commerce’s global mediation competition in Paris. For IMI (International Mediation Institute) in The Hague, he chaired the task force that designed the first ever program for certifying intercultural mediators.
Professor Abramson is already onto his next dispute resolution project. Based on what he learned last year at the U.S. Air Force Academy about the negotiation needs of military members when deployed, he is researching and writing about how to negotiate when little time and trust.
Professor Hal Abramson served as Vice Dean for 9 years at Touro Law School, responsible for academic programs, faculty development, and international programs.
Dean Harry Ballan observed, “Hal has contributed immensely to the field of mediation and arbitration over his career at Touro. The Singapore Mediation Convention is work that will stand as a testament to his dedication to this field and will become part of his tremendous legacy. The Touro community is extremely proud.”