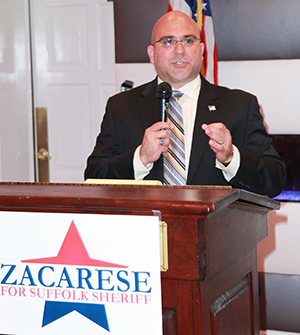 
Lawrence Zacarese ‘14, the Assistant Chief of the Stony Brook University Police Department, scored an upset victory in the Republican primary for Suffolk County Sheriff on Tuesday, September 12, defeating party choice State Senator Phillip Boyle.
In his first try for public office, Zacarese was endorsed by Newsday, and won 56% of the 22,000 votes cast, defeating Boyle, a veteran of 23 years in the State Legislature, for the GOP nod. Boyle retains the Conservative and Independent lines, so the two will face off again in the general election on Tuesday, November 7.
He stated, "Our campaign began last December with one goal in mind, to give the people of Suffolk County a qualified choice for the next Suffolk County Sheriff.  While I know that primaries are not necessarily popular among some in political circles, they are crucially important to the democratic process.  The primary win last Tuesday was not only a major victory for our campaign but I also think it was a major victory for all county voters."
Larry attended Touro in the part-time division. He served as Treasurer of the Student Disaster Relief Network and won the CALI - Excellence for the Future Award for both Disaster Law and Policy and the Disaster Law Clinic.
He began his career as a paramedic before joining the New York City Police Department, where worked as a patrol officer and plainclothes anti-crime officer for five years until his transfer to the Emergency Service Unit, serving as a canine handler and tactical paramedic for nearly seven years before being promoted to Sergeant. Thereafter, he worked as a uniformed patrol supervisor and, in his last assignment, as the Street Narcotics Enforcement Unit Sergeant, before joining the Stony Brook University Police in 2009. He earned a Bachelor of Arts in Forensic Psychology and a Master’s in Public Administration from the John Jay College of Criminal Justice. Larry also holds post graduate certificates from Fairleigh Dickinson University and the University of Virginia in Global Security & Terrorism Studies and Criminal Justice education.
XXX
Touro College Jacob D. Fuchsberg Law Center is located adjacent to both a state and a federal courthouse in Central Islip, New York. Touro Law’s proximity to the courthouses, coupled with programming developed to integrate the courtroom into the classroom, provide a one-of-a kind learning experience for law students, combining a rigorous curriculum taught by expert faculty with a practical courtroom experience. Touro Law is dedicated to providing hands-on learning that enables students to gain experience while offering much-needed legal services in the community.
Touro Law, which has an alumni base of more than 6,000, offers full- and part-time J.D. programs where students can earn a degree in 2, 3, 4 or 5 years and provides four areas of concentration. Touro Law offers several dual degree programs and graduate law programs for US and foreign law graduates, including a new online LL.M. in Aging & Longevity Law. Touro Law Center is part of the Touro College system.
About the Touro College and University System
Touro is a system of non-profit institutions of higher and professional education. Touro College was chartered in 1970 primarily to enrich the Jewish heritage, and to serve the larger American and global community. Approximately 18,000 students are currently enrolled in its various schools and divisions. Touro College has 30 campuses and locations in New York, California, Nevada, Berlin, Jerusalem and Moscow. New York Medical College; Touro University California and its Nevada branch campus; Touro University Worldwide and its Touro College Los Angeles division; as well as Hebrew Theological College in Skokie, Ill. are separately accredited institutions within the Touro College and University System. For further information on Touro College, please go to: http://www.touro.edu/news/.
For more info contact: