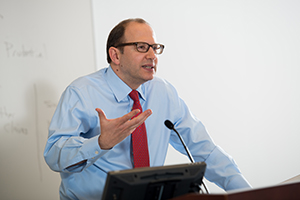 Rodger Citron is a graduate of Yale College, Phi Beta Kappa and summa cum laude, and Yale Law School. As an undergraduate, he majored in American Studies and worked on the Yale Daily News, serving as a sports editor. He also wrote for the Hartford Courant, working as summer intern and serving as a campus stringer during his senior year. After graduating from Yale College in 1988, Citron spent a year doing a series of journalism internships, including a summer with The Pittsburgh Press and seven-month stint as a reporter-researcher for Michael Kinsley while he was a guest editor at The Economist.

Citron then returned to Yale as a student at the Law School, where he was a senior editor of the Yale Law Journal and received the C. LaRue Munson Prize for excellence in clinical work. His student note in the Yale Law Journal has been cited by five courts and in more than 40 law review articles. While at law school, Citron also was a teaching assistant in the American Studies department, worked as a research assistant for Professor Steven Duke, taught in the Street Law program, and was an editor of the Yale Law and Policy Review.

After graduating from law school, Citron clerked for the Hon. Thomas N. O'Neill, Jr., of the U.S. District Court for the Eastern District of Pennsylvania. While serving as a law clerk, he also taught a Legal Writing class at Temple Law School. Citron then worked for a large Philadelphia law firm for two years before becoming a trial attorney at the United States Department of Justice in Washington, D.C.
While at the Department of Justice, Citron worked primarily on the “Winstar” cases, involving novel claims for breach of regulatory contract by savings and loan institutions against the United States. As a member of the government’s trial team, Citron received a Special Commendation for his work on Glendale Federal Bank, F.S.B. v. United States. Subsequently, he worked as a director at FindLaw, Inc., and an attorney-advisor at the Federal Communications Commission (“FCC”). While at the FCC, Citron won all five cases he argued on behalf of the government in the United States Court of Appeals for the District of Columbia Circuit.

After working for more than ten years as a practicing attorney, Citron decided to join academia and teach aspiring law students. In 2004, Citron joined Touro Law Center, where he teaches Civil Procedure and Administrative Law. He also has taught courses in Jurisprudence, Complex Litigation, and Law and Literature. He also has organized international conferences in Paris, France (on the Alfred Dreyfus affair and the Leo Frank case) and Shanghai, China (on the history and legal aspects of Jews in Shanghai in the 19th and 20th centuries).

As a scholar, Citron's law review articles have been published in a number of law reviews, including the Stanford Journal of Complex Litigation, the South Carolina Law Review, and the Administrative Law Review. In addition to the articles he has published in law reviews, Citron is a co-author of A Documentary Companion to Storming the Court (2009). His articles also have been published on Slate, Justia, and SCOTUS blog and in the National Law Journal, the Legal Times, and the Municipal Lawyer. From January 2007 through December 2010, he served as a reporter for the New York State Pattern Jury Instructions Committee.

Rodger is married to Andrea Cohen. They live in New York City with their twin daughters, Alexa and Amelia.