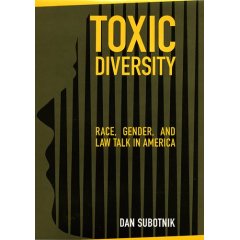 Insisting, in the words of James Baldwin, that "not everything that is faced can be changed, but nothing can be changed until it is faced,” and that thoughtful Americans regardless of race and gender can handle frank conversations about difficult topics, Subotnik’s critique of race and gender theory pulls no punches as it confronts such delicate issues as single parenthood, the merit system in academic and business settings, gender privilege in the classroom, and crime.

“Toxic Diversity is a rare thing: a book by a white writer that takes aim at the theatrics and incoherence at the heart of the ‘racism forever’ routine that masquerades as serious thought from far too many writers on race since the 1960s--but with authoritative command of the literature and relentless logic rather than facile polemics. This is the kind of fearless work that will read as common sense a hundred years from now, to readers who will be as perplexed by much of our current race writing as we are today by medieval tracts about alchemy.”
—John McWhorter, author of Losing the Race: Self-Sabotage in Black America

“The left knows how to dish out criticism. Can it take it? With the publication of Toxic Diversity, we'll find out. More subtle and searching than other critiques of critical race theory, critical legal studies, and feminist legal theory, Dan Subotnik’s book poses challenges that all progressives, myself included, will need to consider.”
—Richard Delgado, University Distinguished Professor of Law & Derrick Bell Fellow, University of Pittsburgh Law School

“Many outside the universities think that political correctness faded from the campus in the mid-nineties. Subotnik shows that it never went away: it got tenure. Toxic Diversity is beautifully written, consistently enjoyable, and replete with wonderful anecdotes and memorable humor.”
—Christina Hoff Sommers, author of Who Stole Feminism?

“A delightful read, filled with logic and humor. I recommend Toxic Diversity to anyone interested in current debates about race, gender, and the state of higher education."
—Diane Ravitch, author of The Language Police

“Thorough, rigorous, and devastating. Whether advocates of the ideas Subotnik scrutinizes will respond to the challenge he poses, and with equal rigor, is the litmus test of scholarly bona fides.”
—Matthew W. Finkin, University of Illinois College of Law

“An entertaining and enlightening excursion into the world of critical race and gender theory. Even those who disagree with Subotnik’s critique will appreciate the value of his analysis. Toxic Diversity is a worthwhile contribution to the dialogue over diversity in its many forms.”
—Steven G. Gey, Florida State University College of Law