Take a look at what some of our Land Use students have been doing!

Congratulations to Victoria Stone whose article, “Hot Wired: Litigation Surrounding the Modern Eruv in New York & New Jersey” was published in New York Zoning Law and Practice Report. Victoria wrote the article as her Advanced Writing Requirement for her Land Use class. She is currently in her third year in the FlexTime program.

The article explores legal issues surrounding the placements of eruvin, a mechanism used by many Jewish communities worldwide to permit carrying objects from their home to other public or private spaces on the Sabbath. An eruv is virtually invisible, typically made of wires, but local governments have become involved in the regulation because it requires placement on public property or within a utility easement.

What inspired you to write about this topic?

This issue is occurring locally to me. The town in which I grew up is currently in litigation over the eruv. I was inspired to write about the topic because while many may view the eruv as simply a wire, it is much more than that for the Jewish community. On a broader scale, denial of the eruv inevitably allows for townships to discriminate against any religion. The greater issue is about allowing people to live where they choose to live, without fear of unlawful discrimination through the law.

What do you think the impact of the article will be?

My hope for the article is that it is eye-opening to what is occurring in many Jewish communities, and for people to understand that if we allow government prohibition for one group, it will happen to another group. This issue also affects many constitutional topics, which are relevant to all of us.

Why did you decide to go to law school?

What are your plans after graduation?

After graduation, I hope to obtain a clerkship in New Jersey and continue my work volunteering with the juvenile community.

What advice would you give prospective students?

I would tell prospective and current law students to pursue their passion and make a difference. We should all strive to be attorneys who are truly servants to the public and to our clients.

Christine took her boss's idea of attending law school and made it a successful venture – enrolling in the FlexTime Program gave her the chance to continue working while pursuing a law degree. She was nervous about the prospect of law school but those nerves proved unfounded. Christine has found success in the FlexTime program, making lasting friendships while preparing for a career in the law. Recently her advanced writing requirement was published in New York Zoning and Practice Report.

What inspired you to attend law school?

I have worked for a nonprofit real estate operator and developer for over 12 years.  I had become bored with my job but had resigned myself to it because it is secure and fulfilling. I was in a meeting with my boss and he was complaining about all of the attorney bills that we receive. He jokingly asked how would I like to go to law school and it just struck a chord with me.  I ran with the idea and the next week I met with Tom Maligno, Touro Law’s director of Public Service. After speaking with Tom, I took the June LSAT exam, applied to Touro Law and started classes in August!

Why did you decide to enroll in the FlexTime Program?

I knew that I would have to attend part-time because I have a full-time job, but I also know myself well enough to know that I could never complete a part-time evening law degree. Tom had mentioned the FlexTime Program and it sounded like a perfect fit.  If it was not for FlexTime I don't think that I would have pursued school.

How did you go about selecting your AWR topic?

This was a bit serendipitous. I was speaking with fellow student Victoria Stone (who is also being published!) about possible topics for our AWR assignment in our Land Use, Zoning, and Planning class taught by Provost Patricia Salkin. She had already chosen her topic and mentioned how interesting she found Indian Law to be.  I mentioned to her that we have two Reservations on Long Island (she is not from Long Island) and that there is an ongoing dispute out east over land owned by the Shinnecock Nation. In the course of this conversation, I realized that this would be a great topic.

What inspired you to write about this topic?

I was particularly struck by how close to home this topic was (physically) and yet how foreign the facts were to me.  Also, my undergraduate degree is in History, so I was pleased to have a topic that allowed me to dive into history. I found it to be a bonus that it was my local history. To me, the story of the Shinnecock is a real David and Goliath story with the incredibly wealthy Town of Southampton on one side and the impoverished Indians on the other. I think there is an opportunity for compromise that could benefit both sides if they can work together. It would be incredibly inspirational to see the Shinnecock Indian Nation rise out of poverty and be a successful and wealthy community.

Any words of advice for others considering law school?

Just go for it.  I will be 45 when I graduate and I thought for sure I was too old to go back to school.  But the fact is had I not gone back to school I would still be 45. I would have missed out on an amazing, humbling, and fulfilling experience.  There have definitely been some ups and downs, but I would do it all again in a heartbeat.

Congratulations to third-year student Beth Gazes whose article, Tiny Homes and New York: Making Way for Housing Options, has been published in the New York Zoning Law and Practice Report.

Beth chose the topic to explore how Suffolk County might accommodate tiny homes such as those seen on popular television shows. Written as an assignment for Professor Salkin's Land Use, Zoning & Planning class, the paper introduces various types of tiny home-living within the context of sustainable housing for all ages, especially on Long Island.

Beth is an appointed member of the Advisory Board of Touro's Institute For Land Use And Sustainable Development Law and will graduate in May. After the bar exam she hopes to practice law with a firm that specializes in Land Use, Zoning, and Planning. 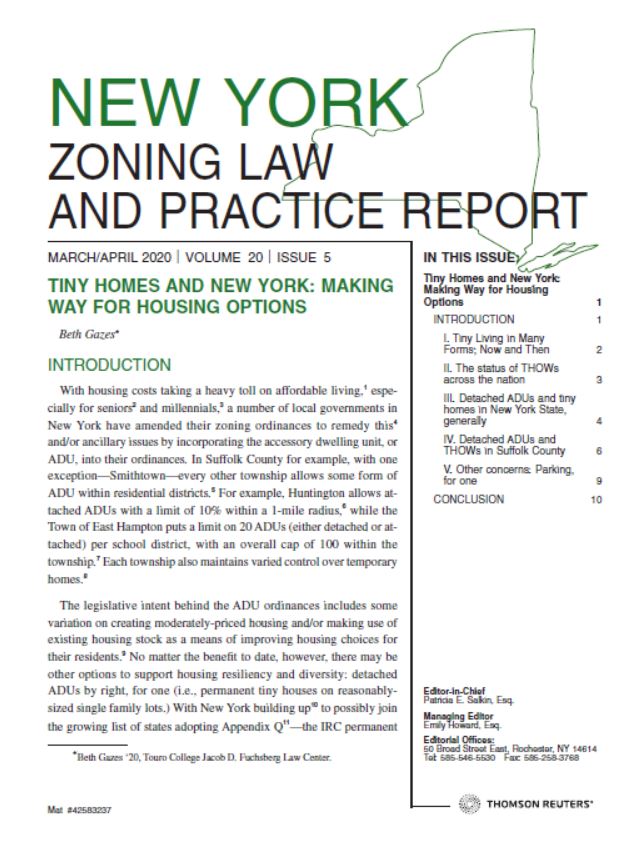 Congratulations to Touro Law student Sydney Gross whose article, “Regulating Pet Cemeteries in New York” was published in the May/June 2019 edition of New York Zoning Law and Practice Report and the article was reprinted in the September/October 2019 issue of Talk of the Towns & Topics magazine.

Sydney is a third-year, full-time student who will be graduating in May. She is a member of the Touro Law Review and she is active in the Student Bar Association where she is the ABA Law Student Representative. Sydney is President of both the Criminal Law Society and Jewish Law Students Association. She originally wrote this article as her Advanced Writing Requirement for her Land Use class with Professor Michael Lewyn.

Sydney stated, “I have a passion for dogs, rescue dogs in particular, and when I was trying to find a topic for my paper I remembered that the Governor had recently signed a law about people being buried with their pets. I decided to look into that new law from a land use perspective.”

Sydney was glad to have her article published and republished, hoping to make an impact in the field. “I was excited to see my paper published in the New York Zoning Law and Practice Report because that goes to zoning lawyers across New York State. I thought maybe I could convince other lawyers to pay attention to the need to create zoning regulations for pet cemeteries,” stated Sydney. “When I found out the Association of Towns of the State of New York was reprinting it in their magazine that goes to all of the town officials across New York, I really started to believe that maybe I was on to a good topic that is of public interest. I also found out that the animal law committees in the State Bar and the ABA have been looking at the topic as a result of my article. It’s a pretty good feeling to know that other people are reading and hopefully using my information and ideas.”

After graduation Sydney hopes to work for an agency that advocates for the rights of juveniles. During her law school tenure she held externships with the Suffolk County District Attorney’s office and with the Nassau County Peer Diversion Court. She also interned with Judge Tantone in Suffolk County Family Court which demonstrated the need to help children and helped reinforce her passion to do so.

“After I graduated from college, where I majored in public policy with a concentration in education policy, I held an internship in the New York State Senate and then worked there for a couple of years. That experience solidified my desire to attend law school to use the law to help people and to make a difference in their lives, especially young people who don’t always have access to legal advocates to help them.”